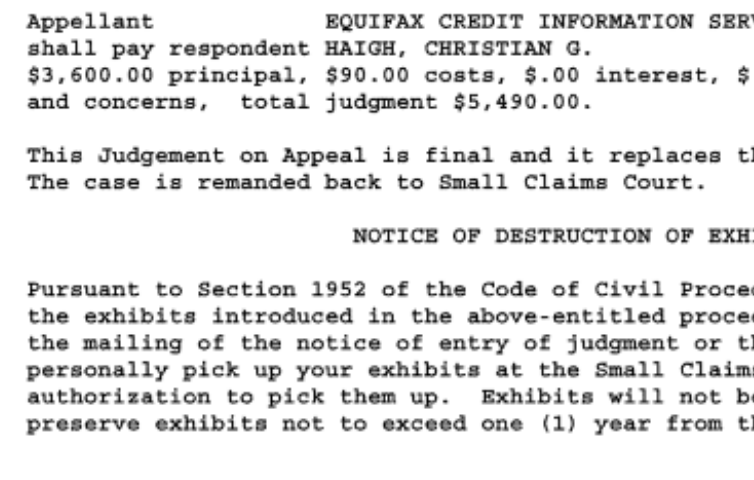 I fought Equifax’s lawyer in court and won

This is part 2 of my Equifax small claims court saga: the Appeal. You can read Part 1 here, where I won my initial judgment of $8,000.

As some augurs on HackerNews correctly surmised, Equifax would not go down without a fight.

I won a judgment in small claims court against Equifax in January for $7,990, but the victory was short-lived. Equifax immediately filed an appeal.

An appeal in small claims court means a completely new trial, in front of a different judge, and unlike a regular small claims trial, small claims appeals allow both parties to bring attorneys.

So on March 8th, I showed up in court at San Francisco Superior Court to find myself facing off with an attorney from a top law firm, Equifax in-house counsel, and a Vice President of Equifax in the legal department.

This is the story of how I won that appeal.

It didn’t take long to find out. Just a few weeks after I won my judgment, I got a letter in the mail from a law firm called King & Spalding, a top notch international law firm with over 800 attorneys.

Although my company frequently works with law firms like K&S, I don’t often get personal mail. After ripping the envelope open, inside was a notice of Change of Counsel from Equifax.

That’s how I knew things were about to get real.

Attorneys at law firms like King & Spalding do not come cheap. King & Spalding is listed among firms where attorneys bill, I kid you not, north of $1000 per hour. Just a couple hours by this attorney preparing for my appeal and a couple hours spent at the actual appeal would be more costly than my entire judgment.

Equifax was bringing out the big guns, for a small claims case that didn’t seem worth it. Some people on Reddit have speculated that they couldn’t let small claims cases like mine get away with high damages, because it would set a bad precedent for the pending class action cases in federal court, but I’m not sure.

Either way, I knew I had to step up my game. We were playing in the big leagues now.

I showed up at court on March 8th to find a crowd already gathered. By crowd, I mean way more people than I had anticipated.

First, there was the attorney himself, a face I recognized from his bio online. He was in a suit, with a leather briefcase, looking very lawyer-like.

Second, there was in-house legal counsel from Equifax, who played a supporting and advisory role to the actual litigation counsel.

Third, there was a Vice President in the legal department of Equifax, who specialized in analyzing credit reports, and could testify specifically to my record.

The judge was again, a judge pro tem, which means she was an attorney who had been appointed judge for the day. Technically in an appeal of a small claims court judgment, you’re allowed to have a Superior Court judge hear the trial. Equifax’s attorney made sure the judge pro tem knew that she wasn’t wanted there.

“You’ll follow the rules and procedures, right?” he demanded, before signing the stipulation.

The judge, a lady with all white hair, nodded mildly. “Yes, I follow all the rules of evidence.”

All three of them sat at the Defendants’ table, and I sat alone at my Plaintiff’s table. I presented my case, for the second time, and brought plenty of evidence to back myself up, including a report done by Senator Elizabeth Warren’s office with aid from the Consumer Financial Protection Bureau, which described in detail how Equifax actually may profit from its negligence.

This time, Equifax was not going to let me off so easy. Before I had even distributed the report, Equifax’s lawyer shook his head vehemently. “How is this evidence even permissible?” he asked, gesturing to my report. “It’s hearsay.”

I had read up on my caselaw. “Hearsay is permissible in small claims court.”

“Show me the case. Do you have the case?”

It was going to be a long hearing.

All in all, the Equifax lawyer tried the following new tactics in their argument and in cross examination. (Yes, you have to be cross-examined as well, where a lawyer asks you questions in an aggressive and intimidating manner.)

I did not include the Fair Credit Reporting Act in my original complaint, and therefore, was not entitled to punitive damages under those provisions.‍

This argument was, in my view, quite silly. The nature of small claims complaints is that you are physically limited by the amount of space provided to a box about 2 centimeters tall. Grievances are made to be aired in court, orally, at which time you plead your actual case. The exchange of lengthy briefs back and forth, enunciating every point, just wasn’t the small claims model.‍

My response: I told the lawyer I orally amended the complaint at the actual hearing. He asked me what evidence I had of that. I pointed to the actual judgment. He said the judgment was not admissible because this was a new trial.

My damages could not be satisfactorily tied to the breach.
During cross examination, the attorney asked me how I could prove that the increased number of the spam calls I was getting were a result of the breach.‍

My response: I asked him how he could prove that they were not a result of the breach. The attorney said, “Mr. Haigh, I believe I am asking the questions.”

My response: The trick here is to emphasize instead what there is evidence of. While there may have been no identity theft yet, my data is definitely in the hands of hackers, which puts me at significantly heightened risk for identity theft in the future.

Sowing general discord and confusion by attempting to enforce rules of procedure that are generally not relevant in small claims proceedings.‍

This was probably the most frustrating part of the entire proceeding. The attorney kept on trying to enforce rules of procedure not relevant in small claims court — such as objecting to my literally two-sentence complaint and saying that anything not mentioned in those two sentences could not be brought up, arguing with me about whether my Elizabeth Warren report could be admitted, and attempting to repeatedly “strike from the record” things that I said, even though there was no record being made. There wasn’t even a court reporter in the room!

After about an hour of back and forth, cross-examination of myself, and myself cross-examining the Equifax Vice President, we were all dismissed and told to wait for the appellate judgment to come through.

I went back to the office, and it popped up just an hour later.

All in all, faced against three top notch legal professionals, I’d call it a win.

Although Equifax has put me through yet another round of battling for the same Small Claims victory, coming out victorious for a second time has given me more confidence that no matter how stacked the odds are against you, the better case will prevail. I came in not knowing the rules and procedures, not having a lawyer, and knowing only the facts of the Equifax breach, and that’s all I needed to persuade two successive judges to award me monetary damages.

Companies like Equifax have all the money in the world. They can send fancy lawyers, and appeal to their heart’s content. Yet if you’re an individual, passionate about data privacy, you can make your case. You don’t need to have gone to law school.

Maybe to win in court, you just have to be right.

(Disclaimer: I am not your lawyer, and this is not legal advice. Results not guaranteed and probably vary significantly depending on the judge you end up with.)